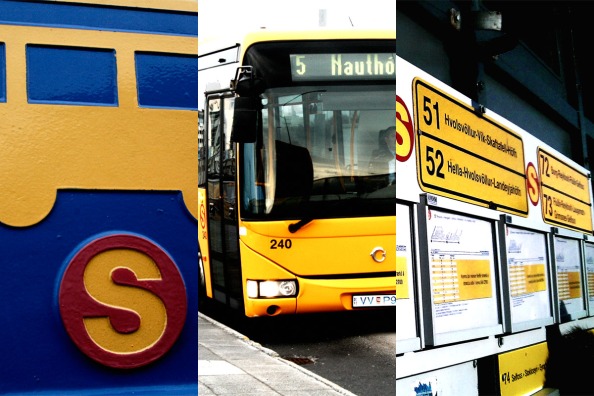 Few years ago there was the saying “Only retarded and foreign workers use the bus”. This was before the crisis. Now the public transport system Strætó got more and more popular, also with Icelanders.  How to use Strætó  to get around Reykjavík & Iceland and much more, you’ll find here.

As I use the public transport daily since I moved to Reykjavík, I got quite used to it. However, there are still things which confuse me and are different to German cities, like for example Berlin or Dresden, where I used to live. I like to share some information and experiences with you about Strætó public transport, which operates busses in Iceland and Reykjavík. Let’s start with the positive things.

The first thing I recognised about Strætós service was its modern approach: They have WiFi in some busses, you can pay your ticket with your smartphone, they have a Strætó App EVEN (!) for Windows Phone, what made me as a WP user especially happy and there are also sockets in some busses to recharge your phone. Besides that their website is pretty informative and well structured – all the neccessary things are also provided in English. That’s something not every European bus company can claim about their websites. The analog bus tickets with their post stamp size look like from the 1930’s though.

Most of the time punctual

Regarding the extreme weather they have to cope with, it is impressive how punctual Strætó busses are. If I compare it to Berlin, the BVG sometimes had huge trouble with snow and other “extreme” German weather. It also needs some severe weather conditions to stop the buses operating. Last week I was travelling from the South to Reykjavík and the wind gusts were crazy. The bus driver however was totally unimpressed. Since then I appreciate the seat belts in busses as much as in cars.

Since a few years the Strætó bus network is growing and growing. The only remaining dead spot on Iceland is now the East. The bus routes stop at Höfn coming from the southeast and at Egilsstaðir coming from the northeast. I really appreciate the intercity bus network as it is a good way to come around in Iceland without having an own car. Because cars are insanely expensive in Iceland. Also, I think it is the right way to travel to safe this unique and delicate nature. Regarding the number of inhabitants the bus network is approaching a lot of destinations and is operating quite frequently.

If you know your destination and the location of the bus stops you sometimes might need to stops just in between. Ask the bus driver, if he can let you out on an exceptional stop. At least for the intercity busses this always worked for me. However, most likely you won’t need it in the Reykjavík area or how it is called in Icelandic Höfuðborgarsvæðið (catchy word again) as the busses sometimes painfully often stop here.

What is not so good about Strætó

Basically it is really hard to find unfriendly service staff in Iceland. Most of the time you will meet people who are friendly and very helpful (also see #8 In 10 Specialties about travelling in Iceland). This however doesn’t apply for the Strætó service staff working at Hlemmur nor at the service office. I’ve never met a friendly seller at Hlemmur neither did I ever received an answer to my questions via e-mail about certain intercity connections.

Sometimes you look at a bus schedule and you are thinking to yourself “Where the heck is this bus driving to”. There are loops and different colours in the routes and no explanation on the schedule, which could help to find out where this bus will gonna lead you. Not even in Icelandic, so you could consult Google translator. If you are lucky, there might be a local also waiting at the stop. And if you are really lucky then he or she knows the route and its features. If not you just can try your luck with “trial and error” – the positive effect on this: You get to know areas you otherwise would have never been to.

If you rely on the public service, it is late, the weather is shitty and you had a long (travel) day, you can get really pissed off when you miss the bus. Especially if you just missed it by a hairbreadth. This happened to me the other day, although there was a so called Rendezvous where all the busses gather at one particular bus stop so you can get your connection. The other day I had to sprint to catch my bus. This is nothing but unneccessary.

Important information only in Icelandic

If you are late for work and you wait for the bus to come and after 15 minutes you realise that the bus won’t come today, because your bus stop is not operated, this can cause quite some jitters. This happend to me and the only “information” I could find was an unflashy note in Icelandic. With the only two Icelandic words “ekki” (not) and “fara” (go) I recognised and the fact that no bus had arrived yet I could somehow make sense out of it. However, in a touristic city like Reykjavík and a language like Icelandic which is assumed to be spoken by only roughly 350.000 people, you could expect at least a tiny English note. Couldn’t you?!

A big part of the Strætó bus drivers seems to be beyond 60+. The good thing is, they still work and seem to enjoy their work. Working into old age is quite common in Iceland and considered as joy to do so. They also speak all good English, which I have never experienced  in Germany (in regions you might be lucky if they speak German at a comprehensible level). But it also seems like they are due to their experience the most venturesome drivers. Sometimes they approach a bus stop with 60 km/h at icy street conditions just to brake as hard as possible. This is not so much fun with luggage or heavy shopping bags.

In total, Strætó is a good thing and you should really consider to drive around in Reykjavík with their service, if you are staying longer than three days or you visit Iceland in the high season. Always keep in mind: It is the greenest solution you can get to experience this lovely little island with its stunning nature and with travelling that way you make sure it will stay healthy.

This site uses Akismet to reduce spam. Learn how your comment data is processed.